What is a facelift?

A facelift, or rhytidectomy, is a surgical procedure that improves visible signs of aging in the face and neck, such as:

The loss of youthful contours in the face can be due to variety of factors, including thinning of the skin, loss of facial fat, gravity, sun damage, smoking, as well as heredity and stress.

Other procedures that might be performed in conjunction with a facelift are brow lift and eyelid surgery to rejuvenate aging eyes. Fat transfer or fillers may be suggested to replace the lost fatty volume. Skin treatments such as IPL, dermabrasion, peels or laser may be offered to improve the quality and texture of the skin.

What facelift surgery can’t do

As a restorative surgery, a facelift does not change your fundamental appearance and cannot stop the aging process.

A facelift can only be performed surgically; minimally invasive rejuvenation treatments cannot achieve the same results, but may help delay the time at which a facelift becomes appropriate and complement the results of surgery.

Some minimally invasive treatments, such as stem cell facelifts, are of unproven benefit.

What are the steps of a facelift procedure?

Medications are administered for your comfort during the surgical procedure. The choices include intravenous sedation and general anesthesia. Your doctor will recommend the best choice for you.

A variety of other procedures can further enhance the outcome of a facelift. They include:

Depending on the degree of change you’d like to see, your facelift choices include a traditional facelift, limited incision facelift or a neck lift.

A traditional facelift incision often begins in the hairline at the temples, continues around the ear and ends in the lower scalp. Fat may be sculpted or redistributed from the face, jowls and neck and underlying tissue is repositioned, commonly the deeper layers of the face and the muscles are also lifted. Skin is redraped over the uplifted contours and excess skin is trimmed away.

A second incision under the chin may be necessary to further improve an aging neck. Sutures or skin adhesives close the incisions. 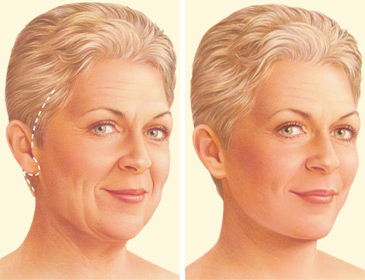 An alternative to a traditional facelift uses shorter incisions at the temples, continuing around the ear. “Mini-lifts” are usually reserved for patients with less skin relaxation, as the results are less rejuvenating than a full facelift. 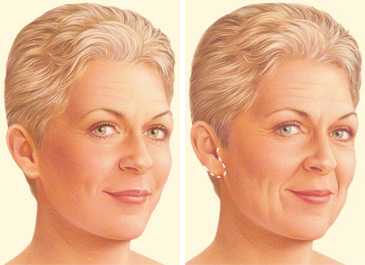 A necklift addresses the sagging jowls, loose neck skin and fat accumulation under the chin. The neck lift incision often begins in front of the ear lobe and wraps around behind the ear, and ends in the posterior hair behind the ear.

The incisions will be closed with sutures that may dissolve or may need to be removed after a few days. Some surgeons use skin glues to seal the incisions. Once healed, the incision lines from a facelift are well concealed within the hairline and in the natural contours of the face and ear.

The visible improvements of a facelift appear once swelling and bruising subside. Your final result should not only restore a more youthful and rested appearance, but also help you feel more confident about yourself. Get more information about facelift results.

What should I expect during my facelift recovery?

Following completion of a facelift, a bandage might be placed around your face to minimize swelling and bruising. Small tubes may be present to draw off any excess blood or fluid.

You will be given specific instructions on how to care for the surgical site and drains, medications to apply or take orally, specific concerns to look for at the surgical site or in your general health and when to follow up with your plastic surgeon.

Be sure to ask your plastic surgeon specific questions about what you can expect during your recovery period.

What are the risks of facelift surgery?

The decision to have plastic surgery is extremely personal and you will have to weigh the potential benefits in achieving your goals with the risks and potential complications of facelift surgery. Only you can make that decision for yourself.

You will be asked to sign consent forms to ensure that you fully understand the procedure and any risks and potential complications.

Facelift risks, while rare, include:

These risks and others will be fully discussed prior to your consent. It is important that you address all your questions directly with your plastic surgeon.

We're not around right now. But you can send us an email and we'll get back to you, asap.